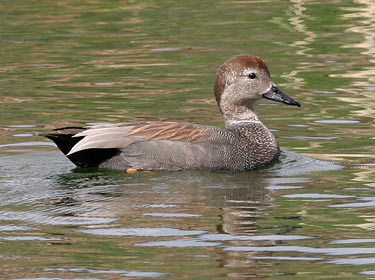 Description: Smaller in size than a mallard. Only duck with a white speculum, with black outer and inner margins. Male is gray with contrasting dark breast and brownish forewing, with black undertail coverts. Female is mottled like the female mallard, except has yellowish bill. White speculum like male.

Behavior: One of the dabbling ducks. Feeds on bottom in shallow water and tips forward, causing tail to stick up.

Habitat: Prefers shallow marshes and sloughs. May also use lakes and reservoirs. Tends to avoid rivers and streams.

Where in Nebraska: A common, locally abundant, spring and fall migrant across the state. Common regular breeder in north-central Nebraska. A rare casual breeder elsewhere.

Nebraska Seasons: Best time to view is in April.

Fun Facts: Gadwalls unlike other dabbling ducks are not as gregarious, or social, outside of the breeding season and tend to form small flocks.