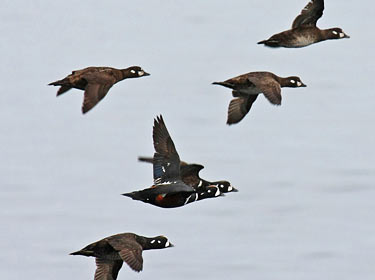 Description: Male is slate blue, has chestnut flanks, and white markings bordered in black. Round white spot behind eye. Female is duller version of male.

Behavior: Diving ducks, with a diet of snails and crabs.

Where in Nebraska: Accidental.

Fun Facts: The Harlequin Duck is also called the Sea mouse because of its very unducklike squeaks. Other names include Circus duck or painted duck for its beautiful colors.

Additional Information: The latin name Histrionicus means “stage player” or “actor” presumably in reference the colorful appearance which resembles an actor made up to play a role.