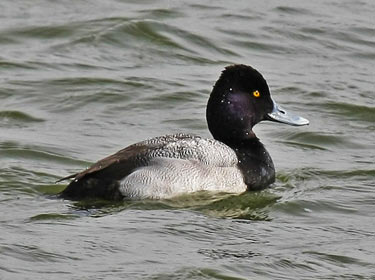 Song or calls:
Courting males will give a cooing whistle. Females, a low “arrr.”

Description:  Male white sides, gray back, black breast and tail, purple sheen on head as opposed to green on Greater Scaup.  Peaked crown (Greater Scaup head is rounded).  Female brown with white patch at base of bill.  In flight, both sexes show a white stripe only on secondaries, shorter than Greater Scaup.

Where in Nebraska: Common to abundant spring and fall migrant across the state.  Occasionally summers in Sandhills.  Only breeding records from Crescent Lake NWR.  Will winter if open water is present.