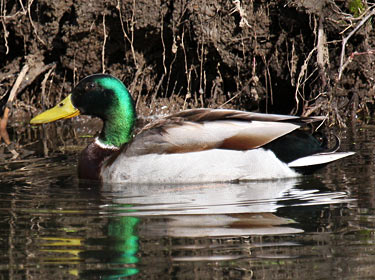 Habitat: During the breeding season prefers shallow waters of marshes, oxbows, and ponds that provide surface and subsurface foraging. In migration utilizes large open marshes, lakes or reservoirs with grain fields nearby.

Where in Nebraska: Abundant regular spring and fall migrant across the entire state. A common regular breeder statewide and a common, locally abundant, regular winter visitor throughout the state.

Nebraska Seasons: Late spring, summer and early fall are all good times to find Mallards in wetlands, along slow moving streams, in potholes, and in shallow marshes.

Field Notes: Most widespread species of duck throughout the Northern Hemisphere.

Fun Facts: The Mallard is the ancestor of all domestic ducks in the world, except for the Muscovy Duck which does not live in Nebraska.