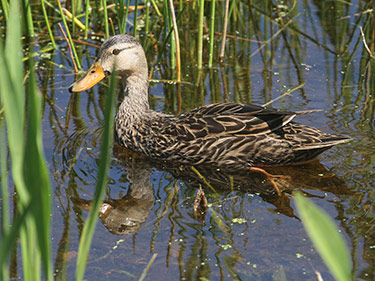 Song or calls:
Similar to Mallard.

Where in Nebraska: Accidental in the fall.

Fun Facts: Most carnivorous of all dabbling ducks. Until recently, the Mottled Duck was the only duck that nested in Southern marshes. As a result, the male adapted to look like the female, so now they both look the same.

Additional Information: Considered by some to be a subspecies of the Mallard.