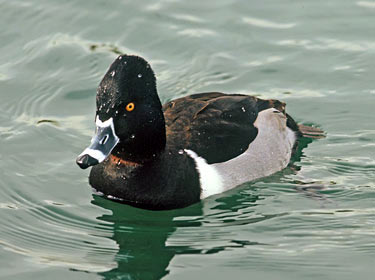 Usually silent, but males will give a soft whistle during courtship.

Habitat: Divers, like the Ring-necked Duck, use large lakes and reserviors during migration. In the breeding season they use acidic bogs and swamps bordered by shrubby cover.

Field Notes: Additional Information: Name comes from its cinnamon collar, but the collar is often hard to see in the field.