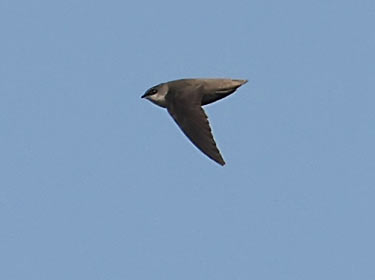 Behavior: Performs a rocking display where with the wings upraised, the bird rocks from side to side.

Habitat: Variety of open habitats, but most common in cities where chimneys and other similar man-made structures provided roosting and nesting sites.

Where in Nebraska: Abundant spring and fall migrant and summer resident across much of the state, becoming less common in the west. Regular breeder in eastern Nebraska.

Fun Facts: Chimney Swifts are very aerial and acrobatic birds even cleaning themselves mid-flight. They will fly down slap their breast against a water source and then fly away while shaking the excess water and cleaning themselves.