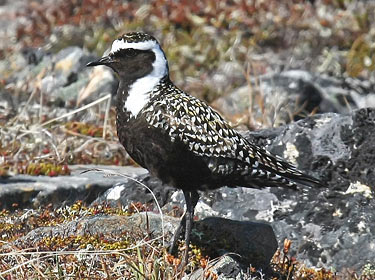 Description: Sexes similar. In breeding plumage has white and gold speckling on back and crown. Black cheek patch that extends down
through neck and belly. Prominent white stripe across forehead, ear, and down sides of breast. Distinguished in flight by totally dark underparts and gray underwings. Winter and juvenile plumage
is darker on back, with buffy forehead and underparts; have prominent white eye stripe.

Where in Nebraska: Uncommon to occasional spring and fall migrant in eastern Nebraska. Rarer in the west.

Nebraska Seasons: More common in spring than in fall.

Fun Facts: The American Golden Plover is the fastest flying shorebird reaching speeds of 60 miles an hour and have the longest migration of any American bird flying 20,000 miles a year.