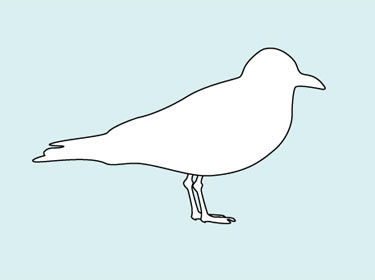 Song or calls:
Usually silent except on breeding grounds, where it utters noisy harsh cries.

Description: Sexes similar. Distinguished from other gulls by huge size and large bill. Breeding adults are black above with a white head and underparts; pale eyes; large yellow bill with a red spot; and pale pink legs. Winter adult is almost identical to breeding adult with a virtually unstreaked head. Third winter bird is like adult but shows some brown on the wings and a black-tipped yellow bill. Second winter bird shows brown streaking on head, breast, and flanks; small amount of black on back; brown wings; and black-tipped pale bill. First winter bird resembles second winter but lacks black on back and has an all dark bill.

Habitat: Migrants can be found on rivers, lakes, larger reservoirs, and coastal shorelines.

Where in Nebraska: Accidental. Seen in Hamilton County in 1952, in Lake Manawa area in 1978, at Kingsley Dam, Keith County in 1994, and at Wagontrain Lake, Lancaster County in 1996.

Fun Facts: Their population increased greatly after the demise of the feather trade in the early 1900’s, because in the 1800’s their feathers were used for fashionable clothing.