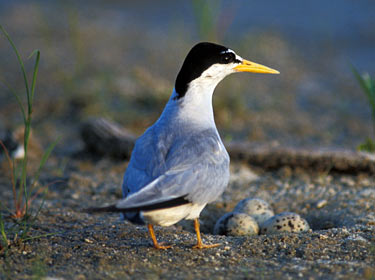 Habitat: Migrants can be found on lakes, rivers, and reservoirs. Nesting is done mainly on river sand bars or islands, but sometimes also on barren shorelines, gravel beaches, or newly cleared land.

Where in Nebraska: Uncommon spring and fall migrant in eastern part of the state. Highly local summer resident in Platte and Niobrara River valleys. Local breeder.

Fun Facts: When a predator/intruder enters the colony, the adults will mob and then defecate (poop) on the intruder.