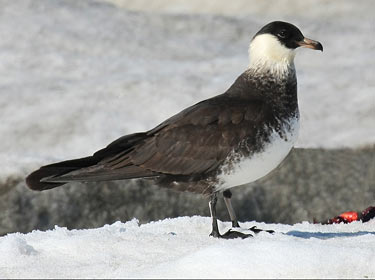 Description: Sexes similar. Largest of the jaegers and stockier than other species. Light phase is dark above; white below; dark cap; and yellow wash on throat. Often has strong to incomplete dark breast band. Distinctive coarse barring on flanks. Dark phase entirely blackish. Central tail feathers extend beyond rest of tail and are twisted at the ends forming blobs when seen from the side. Immatures brownish overall with strong black barring.

Food: A predatory seabird, on its tundra breeding grounds it feeds almost entirely on lemmings.

Habitat: Breeds on the tundra, and after the breeding season spends its time on the open ocean.

Fun Facts: Pomarine Jaegers will fly at the head of a human or other intruder approaching its nest.