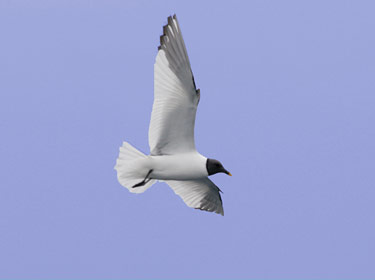 Description: Sexes similar. Distinctive black-gray-and-white wing pattern in all ages. Breeding adult has dark gray hood with a thin black ring at the bottom; black bill with yellow tip; black legs; and a forked tail. Juveniles are gray-brown above and white below; bill shows little or no yellow; and the tail has a dark band.

Habitat: Most migration occurs along the coasts, but migrants can sometimes be found on large rivers, lakes, and reservoirs.

Where in Nebraska: Accidental. Rare to uncommon regular fall migrant. Two specimens collected from Lancaster and Gage Counties in 1899. Seen in Omaha in 1928, in Lincoln County in 1966, and in Garden County in 1978.

Field Notes: The migrants that occur in the interior are usually juveniles. When in flight the Savine’s Gull has continuous wingbeats.

Fun Facts: Although most Sabine’s Gulls migrate along the coasts, some will migrate north and south through the United States and through Nebraska.