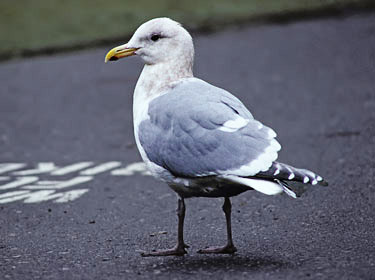 Description: Sexes similar. Breeding adult is pale gray above (slightly darker gray than Herring Gull) and white below; usually show a dark eye; yellow bill with dark red spot; legs are dark pink. Winter adult is similar to breeding but has brown streaking on head and breast. Second winter bird has a gray back, brown wings, and black tip at end of bill. First winter bird is variable, from brown overall to white with brown mottling; always with a dark eye and totally dark bill.

Habitat: Breeds in the arctic, and is usually found along the Pacific Coast during the winter.

Fun Facts: Due to it’s similarity to Herring and Iceland Gulls, even experts have a difficult time identifying Thayer’s Gulls in the field.