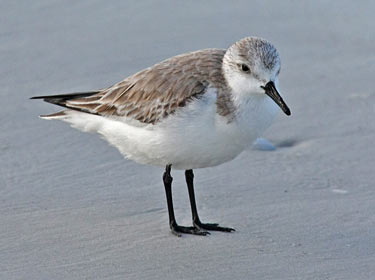 Song or calls:
Sharp high-pitched “twick,” sometimes given in a series.

Description: Sexes similar. Breeding adults show mottled rusty head, mantle, and breast; feathers on the back are black with rusty edges; white belly. Winter plumage is the palest of all sandpipers: pale gray above and white below with black legs and bill. A bold white wing stripe shows in flight.

Where in Nebraska: Rare to occasional spring and fall migrant in eastern and central parts of the state. Rarer in the west.

Field Notes: Sanderlings can be quite tame, as incubating birds can be observed from as close as two to three feet.