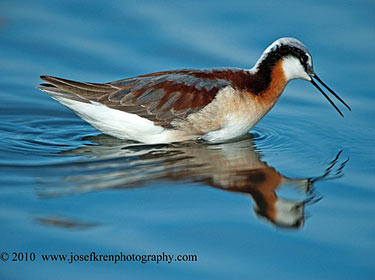 Description: Long thin bill. Breeding female is more colorful than the male. Black eye stripe that extends down side of neck; rust colored wash on throat; gray and white head; and white underparts. Male is smaller and duller version of female. Both sexes lack wing stripe visible on other phalaropes. Winter adults are gray above, white below; and lack distinct black ear patch. Juvenile is mottled brown above and buffy below.

Habitat: Breeds in wet meadows near aquatic habitats like marshes or shallow lakes.

Where in Nebraska: Common to abundant spring and fall migrant. Common summer resident and breeder, especially in the Sandhills. Occasional breeds elsewhere, such as in the Rainwater Basin.

Field Notes: Wilson’s Phalaropes, unlike other phalaropes does not have lobed toes so consequently they rarely swim and are not found at sea.

Fun Facts: All phalaropes have distinctive method of feeding: they spin like tops on the water, stirring up larvae and insects which they take from the surface.