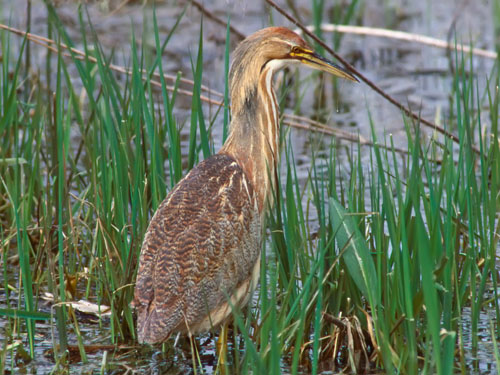 Description: Sexes similar.
Adult heavily streaked below with rufous-brown on yellow-buff; dark brown above, finely marbled on back and wings; broad black stripe on side of yellow-brown neck; sides of chin white; bill yellowish; legs rather short and green. Juvenile similar, may lack black neck stripe.

Behavior: Walks with bill angled upward. When alarmed, freezes with bill pointing up, or flushes with rapid wingbeats.

Status: Appears to be a decline in numbers in Nebraska.

Fun Facts: To avoid detection from predators, American Bitterns stick their beak straight in the air so their barred neck blends in with the surrounding reeds and brush and sway with the wind much like the grasses would.