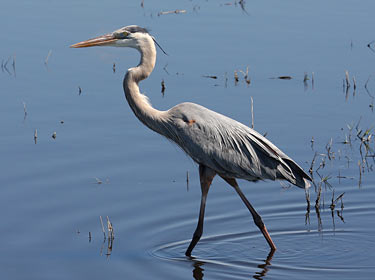 Habitat: Migrants are found along all water areas supporting a fish population and having shallows for foraging. Nesting usually occurs in colonies among groves of tall trees.

Where in Nebraska: Common regular spring and fall migrant statewide; local breeder in the western and central portions of the state; uncommon in the east. Locally rare but regular winter visiter. The heron may be seen along most rivers, streams, farm ponds, lakes or reservoirs that contain a fish population. Tall cottonwood trees are often used for nesting colonies although some active colonies have been documented in low-growing hackberry trees in the Sandhills and on abandoned tranmission poles along the Platte River.

Fun Facts: Great Blue Herons catch much of their prey by spearing fish with their long sharp bill and sometimes a heron has been known to choke to death trying to eat a fish that was too big.