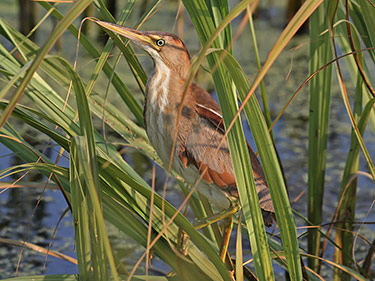 Description: Adult male has black crown and back; chestnut hindneck; yellow-buff below, with white streaking down middle from chin to vent; slender yellow legs and bill. Adult female similar, but with chestnut-brown back and blackish-brown crown; fine streaking below. Juvenile similar to adult female, but throat and breast have broader brown streaks and crown is chestnut-brown.

Nebraska Seasons: Least Bitterns are most observable in mid to late June when adults are regularly flying over marshes feeding young.

Field Notes: Secretive, thin-bodied heron that often climbs in reeds. Number of sightings are speculated to be associated with seasonal moisture levels.

Fun Facts: When alarmed, the Least Bittern freezes in place with its bill pointing up, turns its front and both eyes toward the source of alarm, and sometimes sways to resemble wind-blown marsh vegetation