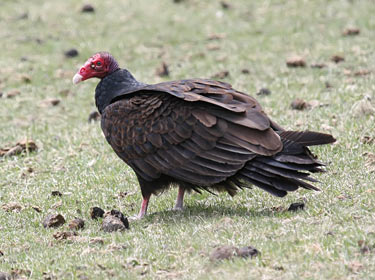 Song or calls:
Usually silent, but over coveted animal carcasses groups of vultures may hiss, flop or fight.

Food: Feeds on carrion and locates by sight and smell.

Where in Nebraska: Common regular spring and fall migrant throughout the entire state and locally uncommon regular breeder statewide. Hypothetical in winter.

Field Notes: At night, groups of a few up to 100 roost together in trees and then leave in late morning when thermals develop.

Fun Facts: The Turkey Vulture will defecate on its own legs using the water in the feces help cool itself down.