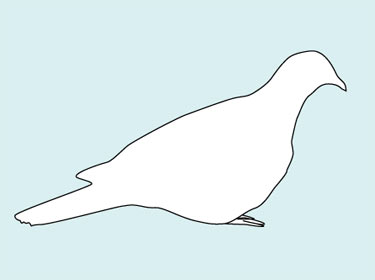 Song or calls:
Coos along with loud croaking, chattering, and clucking noises.

Description: Sexes similar. Long graceful pointed tail; slate-blue head; black bill; and red legs. Slate-gray back with gray-brown to olive-brown tinge; slate-blue rump and lower back; russet or wine red underparts with a white belly. Iridescent feathers on the sides and back of neck with metallic gold or violet glow; and small black spots on wings. Dark tail had white outer edge.

Where in Nebraska: Formerly ranged over much of eastern North America. Was a common migrant and summer resident in eastern parts of Nebraska.

Fun Facts: Passenger Pigeon were extremely social animals that liked to live and travel in large groups at all times. A roosting colony could comprise well over 100,000,000 birds and cover more than 800 square miles of forest, with as many as 100 nests per tree.

Additional Information: In the mid-1800’s, the population of Passenger Pigeons was estimated between three and five billion birds, the birds were extinct by 1914.