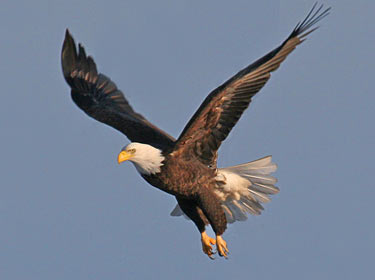 Habitat: Wintering eagles are found in ice-free areas along larger rivers and reservoirs with trees nearby. Eagles prefer to perch in tall cottonwoods near the water.

Where in Nebraska: Uncommon spring and fall migrant. Locally common winter resident near major rivers and reservoirs. In recent years Bald Eagles have attempted to nest every summer near large bodies of water. In 1996 there were ten documented nests.