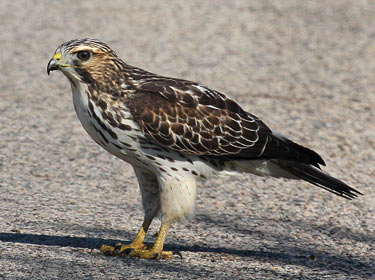 Where in Nebraska: Uncommon spring and fall migrant in eastern Nebraska. Occasional summer resident in forests along Missouri River. Rare in western part of state.

Field Notes: One of few North American raptors that flock during migration. Tens of thousands can be seen at peak of migration.

Fun Facts: The Broad-winged hawk travels from its wintering grounds in South America to their breeding grounds in northern Canada, traveling over 7,000 miles twice a year.