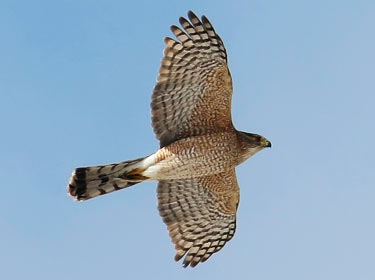 Description: Distinguished from similar Sharp-shinned Hawk by a rounded, not squared, tail. Also larger than Sharp-shinned. Male is slate blue above, with rust-colored cross-barring below. Female is larger than male, and brown-blue above with rusty bars below. In adult, look for strong contrast between back and crown. Immatures brown above, with brown streaking below.

Where in Nebraska: Uncommon winter visitor and spring migrant across the state. May be local permanent resident. Becoming a common breeder statewide in towns and woodlands.

Fun Facts: Cooper’s Hawks kill their prey by constriction unlike most hawk species who use biting as an effective killing method. They are often used as pigeon control in major cities.