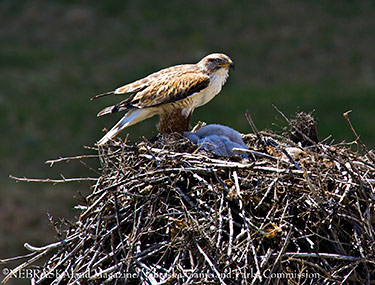 Description: Sexes similar markings.
Large and heavy with long pointed wings and large bill. Displays a light patch on upper primaries, has white wrist marks, or “commas” as they are called above and the primaries are light and black-tipped below; dark morph has whitish underparts with a dark V formed by the legs. Has a pale head and a rusty body above and rusty legs.

Behavior: This Buteo is commonly seen soaring or perching on poles or the ground.

Habitat: Open country; primarily large tracts of prairie plains and badlands. Known to breed in trees near streams or on steep slopes, sometimes on mounds in open grasslands. In Nebraska this hawk has been observed in the shortgrass prairie with rock outcrops or scattered trees. It is most common in the western Sandhills and Panhandle during breeding season, observed in the western two-thirds of Nebraska in winter and migration, very rarely in the east.

Listen to Ferruginous Hawk from the Ohio Digital Resource Commons