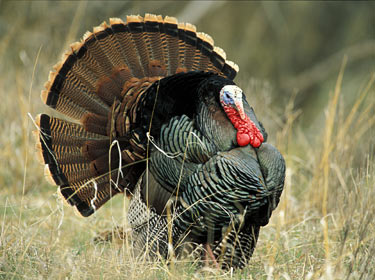 Gobbling call can be heard from up to a mile away.

Habitat: varies in different parts of the state, but most birds are found in flood plain forests with a variety of deciduous trees. Preferably the trees produce acorns or other large seeds.

Where in Nebraska: Once extirpated from Nebraska, Wild Turkeys have now been re-established as a permanent resident in many areas, including the Pine Ridge area and along major river systems.

Fun Facts: Benjamin Franklin suggested the national bird should be the wild turkey instead of the bald eagle. Today turkeys can be found in every state except Alaska.