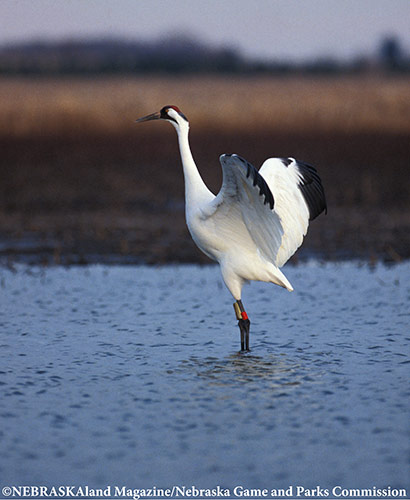 Description: The adult Whooping Crane, male or female, is white with a red crown and long, dark, pointed bill. They have black wing tips that are visible while in flight. Juveniles are white, with a brown or cinnamon appearance. The species stands at about 5 feet (1.5 meters) tall with a wingspan of about 7.5 feet (2.3 meters). In flight, their legs trail behind while their neck is kept straight.

Behavior: Their behavior during courtship is entertaining to observe. They perform an elaborate dance with leaps, sweeps, bowing, head tosses, stick or grass tossing and wing flaps. This dancing is commonly associated with courtship, however it is generally believed to be a normal part of development for cranes. Mated pairs engage in unison calling, which is a complex and extended series of calls coordinated between the members of the pair. The call is a very distinct “whooping” sound that gives the species its name. Typically, Whooping Cranes migrate in small groups or in family groups (5 or more with more than one generation). They are known to roost and forage with the migrating Sandhill Cranes in Nebraska along the Platte River; however, they do not stay as long as the Sandhill Crane.

Food: They eat a wide variety of plant and animal matter, including mollusks, crustaceans, insects, fish, frogs and waste grain (such as corn). While feeding, they peck, probe and stab their food with their bill. 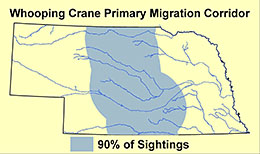