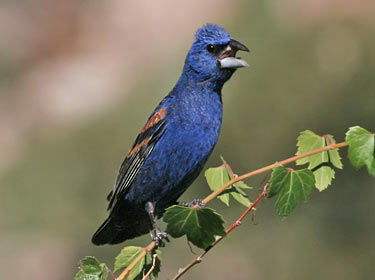 Loud, explosive chink. Song is simple warble that rises and falls in pitch.

Behavior: Has habit of twitching and spreading its tail.

Where in Nebraska: Uncommon and highly local in eastern Nebraska, and rare in the Pine Ridge.

Fun Facts: The Blue Grosbeak sometimes uses snakeskin as nesting material, which is thought to scare away predators.