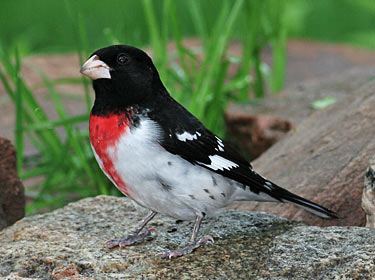 Habitat: Relatively open deciduous forests on floodplains, slopes, and bluffs. Does not require dense understory as does Black-headed Grosbeak.

Where in Nebraska: Common spring and fall migrant and summer resident in eastern Nebraska. Hybridizes with Black-headed Grosbeaks in western Nebraska.

Fun Facts: The male Rose-breasted Grosbeak participates in nest incubation for about 1/3 of the time, while the female sits overnight. When the parents switch turns they sing quietly to each other and the male continues his song even after he is incubating. The male also tends fledged young while the female builds a second nest.