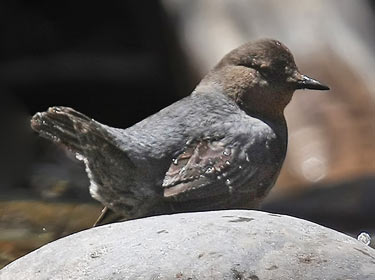 Song or calls:
Song is loud and musical; wren-like. Call is sharp “zeet.”

Behavior: Dippers lead an aquatic life, wading and even swimming in mountain streams to feed. These birds will run along the bottom of streams with their wings half-open.

Where in Nebraska: Rare vagrant. Individuals have been reported once each from Sioux, Dawes, Cherry, Holt, Chase, and Adams Counties. At least four records since 1960.

Nebraska Seasons: Will sometimes move to open water at lower elevations during winter.