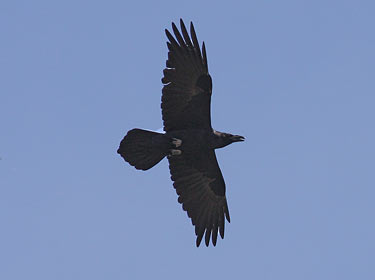 Song or calls:
Harsh, prolonged “caaaa,” higher in pitch than that of a Common Raven.

Habitat: Usual breeding habitat is of open and arid grasslands, with scattered trees, telephone poles, or windmills for nesting sites. Not associated with river valleys or heavily forested areas.

Where in Nebraska: Once an uncommon or local resident in Adams and Kearney Counties. Now a rare breeder, with recent nesting record for Dundy County. Scattered sightings elsewhere in the state.

Fun Facts: Like other corvids, Ravens can copy sounds from their environment, including human speech.