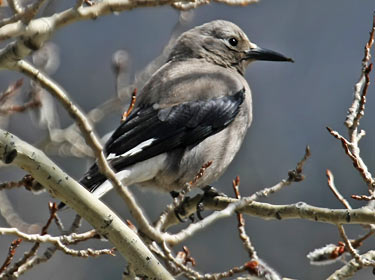 Where in Nebraska: Rare vagrant in Nebraska. Most records from Pine Ridge area, but seen as far east as Douglas and Cass Counties.

Field Notes: Known to be a bold scavenger at campsites and farmhouses. Also irrupt into desert and lowland areas of the western United States.

Fun Facts: They will hide/store thousands of seeds each year in different locations. They have such a great memory they can remember where they hid the seeds.