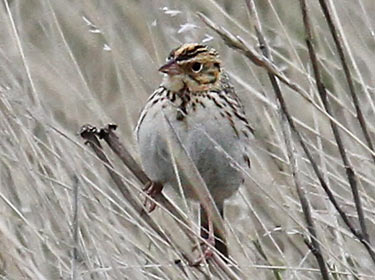 Song or calls:
Song begins with 2 or 3 high thin notes, followed by single warbled note and a low trill.

Behavior: Secretive and hard to spot; slips through grass instead of flies when flushed.

Where in Nebraska: Uncommon spring and fall migrant across most of the state, becoming less common eastwardly and rare in extreme eastern counties.

Status: Numbers have declined with loss of virgin prairie habitat.

Fun Facts: Baird’s Sparrows like open areas such as native prairie mixed with forbs and recently burned forests where they are usually abundant for two to three years after a fire