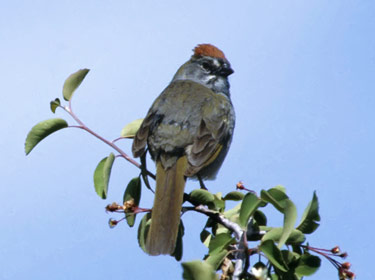 Behavior: Usually sings from atop a shrub or young conifer. Erects reddish crown into a crest.

Where in Nebraska: Uncommon but regular spring and fall migrant in western Nebraska. Mostly seen in Panhandle, but recorded east to McPherson, Logan, and Lancaster Counties.

Fun Facts: Green-tailed Towhees are the smallest and only entirely migratory bird of all the towhees.