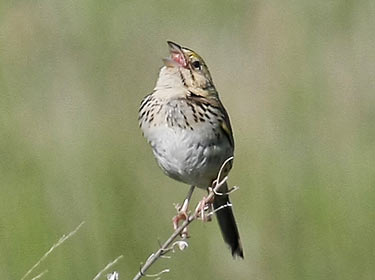 Song or calls:
Song is short, quiet “se-lick,” with accent on second syllable.

Behavior: Secretive; may perch in open for a few minutes after being flushed several times before dropping back into cover.

Where in Nebraska: Occasional spring and fall migrant and summer resident in eastern Nebraska. Most records from Adams and Webster Counties. Breeding limited to Lancaster and Washington Counties.

Fun Facts: When Henslow’s Sparrows sing, they are mostly active at dawn and dusk, but will sometimes sing all night.