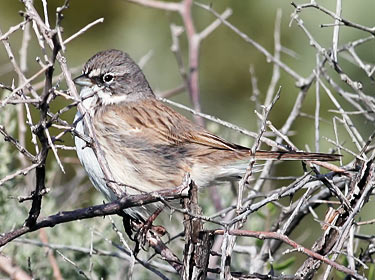 Song or calls:
Song is jumbled series of finch-like notes with rising and falling phrases; sung from low perch.

Behavior: Has habit of flicking its tail while hopping around on ground. Runs from intruders, with tail cocked, rather than flying.

Where in Nebraska: Accidental. One documented record in Sioux County August 1989.

Fun Facts: The Sage Sparrow when approached prefers to run along the ground rather than fly, as a result is spends much of its time running on the ground with its tail in the air.