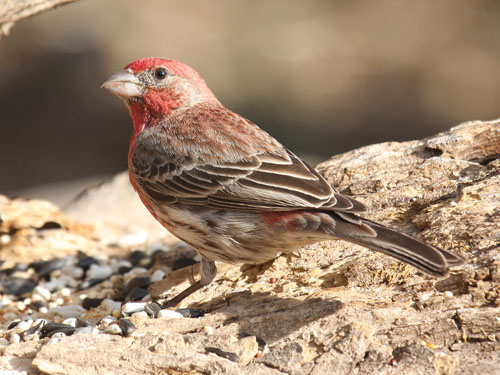 Song is series of warbling notes that end in “zeee” lacks musical trills and rolls.

Description: Adult male has brown cap and brown upperparts; front of head, throat, breast, and rump are usually red but can vary from orange to yellow; underparts are streaked with brown. Females and juveniles are brown-streaked overall; lacks white facial markings.

Where in Nebraska: Locally common permanent resident in both eastern and western Nebraska. Least common in the Sandhills.

Status: Eastern and western populations are a result of rapid immagration into the state from both directions during recent years. The entire state will likely be colonized within a few years.

Fun Facts: House Finches were originally introduced in Long Island, NY in 1940 where they flourished and have spread all over the United States.