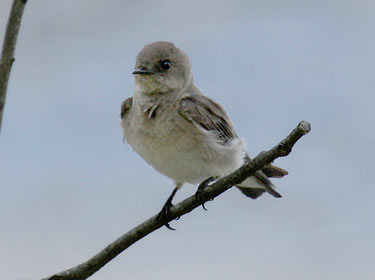 Description: Sexes similar. Brown above, and white below with gray-brown wash on chin, throat, and upper breast. Lacks distinct breast band. Juvenile is similar but has cinnamon wing bars.

Habitat: Generally found in open-country habitats, often near rivers or creeks with exposed vertical banks that can be excavated for nest sites.

Where in Nebraska: Common spring and fall migrant and summer resident across the state, but perhaps less common westwardly.

Fun Facts: Common name comes from tiny serrations on the outermost wing feathers only seen when the bird is in the hand. Tiny hooklets on the outer vane of the outer primary near the end of the shaft are visible only under a microscope. Their function is unknown.