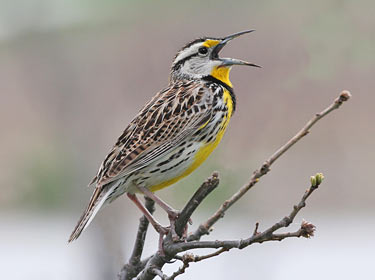 Behavior: Meadowlarks fly with stiff wings, usually fluttering them a few times and then sailing.

Where in Nebraska: Found in low, moist areas around marshes in the Sandhills and along the western Platte River. Common spring and fall migrant and summer resident in eastern Nebraska, becoming rarer westwardly. Hybridizes with Western Meadowlarks in west. Occasionally overwinters.

Fun Facts: If an Eastern Meadowlark feels threatened by a predator, it crouches down to hide its bright yellow breast.