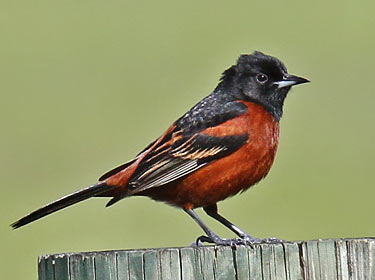 Song is a rapid, musical warble with a medley of melodious whistles and flute-like notes.

Behavior: Migrates south early (in July and August) compared to other birds.

Fun Facts: The Orchard Oriole is a rather late spring migrant, but it heads back southward quickly. Some orioles may return to their wintering grounds as early as mid-July.