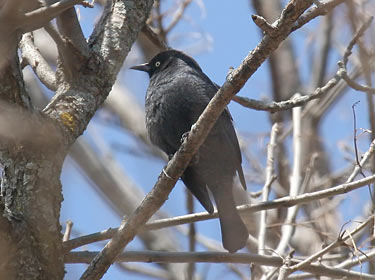 Where in Nebraska: Usually not found in open marshlands, grasslands, and croplands as are other species of blackbirds. Common spring and fall migrant in eastern Nebraska, becoming rarer westwardly. Frequently overwinters.

Field Notes: Forms large flocks with other blackbirds during fall and winter, but is not seen in open fields.

Fun Facts: The Rusty Blackbird feeds mostly on insects and plant matter, but it sometimes attacks and eats other birds. The male feeds the female on the nest.