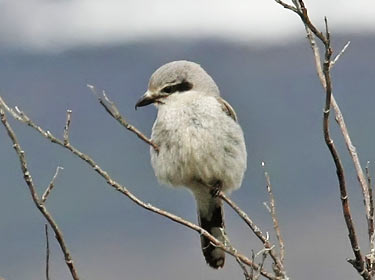 Song or calls:
Usually silent in winter. Song is a subdued, varying warble that often imitates other birds.

Behavior: Kills more than it can eat, and stores it food by impaling prey on a thorn or barbed wire. On lean days it will eat from its larder.

Habitat: Occur on open plains or prairies with scattered trees or telephone posts for perching.

Where in Nebraska: Uncommon to locally common winter resident across the state. Perhaps more common in the west.

Fun Facts: The nest of the Northern Shrike is an open cup, but it is so deep that while incubating, the female is completely out of view except for the tip of her tail.