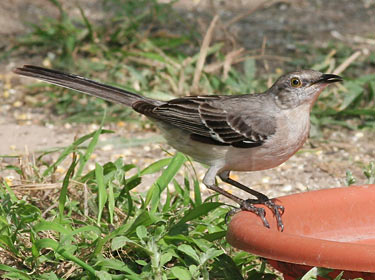 Original and imitated phrases, repeated 4 or more times. Imitates other species, barking dogs, etc. The spring song is sung only by the males, and may continue for hours, day or night. Both sexes sing in the fall.

Habitat: Found in a variety of habitats, including open woodlands, forest edges, farmlands, and cities and parks. Treeless plains and heavy forests are avoided.

Where in Nebraska: Uncommon spring and fall migrant and summer resident in southern and eastern Nebraska, becoming rarer to the north and west.

Fun Facts: A male may learn around 200 different songs thoughout its lifetime.