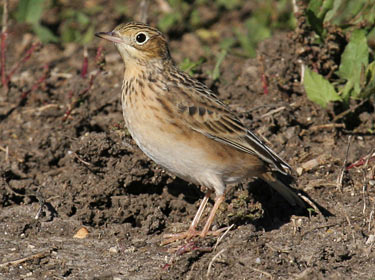 Song or calls:
Squeaky “squeet,” given 2 or 3 times. Song, given in flight, is descending “tzee”

Behavior: Secretive and somewhat solitary. Unlike American Pipit, does not have habit of pumping tail.

Habitat: Found in dense, grassy vegetation of plains and prairies. Unlike American Pipit, not often found in bare areas close to water.

Fun Facts: When Sprague Pipit males are displaying for females they will sometimes hover in the air for half an hour to attract a mate. One male was once recorded remaining airborne for three hours displaying for a female before descending to the ground.