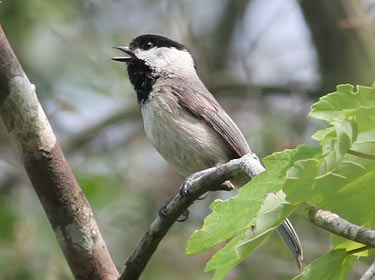 Habitat: Open deciduous forests, woodland clearings and edges, and suburban areas. Forages in trees and thickets, and seldom descends to the ground to feed.

Where in Nebraska: Accidental. Specimens captured in Fontenelle Forest, Sarpy County in 1974, after being first heard there in 1969.

Fun Facts: Carolina Chickadees can hybridize with Black-capped Chickadees and their offspring can sing either song of the parents or something in between.