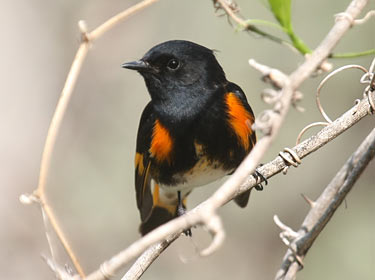 Behavior: Often spreads its tail and wings while perched, showing off its conspicuous, colorful patches.

Where in Nebraska: Common summer resident in eastern counties, Pine Ridge area, probably the entire Niobrara Valley, and locally in the Sandhills.

Nebraska Seasons: Common spring and fall migrant across the state.

Fun Facts: American Redstarts are known in some areas as “latrine birds” because of their tendency to look for flies around outhouses and garbage dumps.