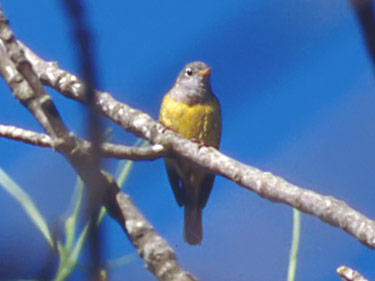 Description: Large and stocky; long undertail coverts give short-tailed appearance. Brownish-olive above; yellow below; red-orange legs; large eye with bold white eye ring that is sometimes broken on one side only. Male has gray hood; female has brown or gray-brown hood. Immature has brownish hood and brownish breast band.

Behavior: Nests and feeds on the ground; walks rather than hops.

Where in Nebraska: Uncommon or occasional spring and fall migrant in eastern Nebraska.Rarely occurs in west. More often seen in fall than spring.

Fun Facts: The first Connecticut Warbler found and studied by a scientist was located in Connecticut, however they do not breed nor are they a common migrant in Connecticut.