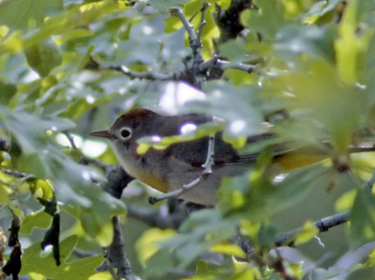 Description: Gray head and neck; darker gray wings; greenish-yellow rump; whitish below with yellow patch on breast and yellow undertail coverts; bold white eye ring; reddish crown patch is seldom visible in the field. Female is duller overall. Fall immature is brownish-gray above, with little or no yellow on breast. No wing bars.

Food: Forages for insects and spiders near the ground.

Habitat: Usually found in brushlands and pinyon-juniper woods, often at elevations between 6,000 and 9,000 feet.

Where in Nebraska: Accidental. Seen in North Platte, Lincoln County in 1964.

Fun Facts: Virginia’s Warbler is not named after the state of Virginia rather it was named after Virginia Anderson who discovered it in New Mexico in 1858.