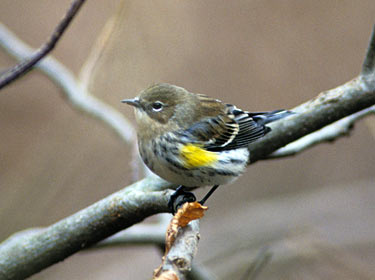 Song is loud trilling, rising or falling at the end.

Fun Facts: Diverse array of foraging behaviors like clinging to the bark surface to look for hidden insects, frequently sit on exposed branches and catch passing insects like a flycatcher does. Will also eat fruit and have even been seed eating seeds at bird feeders.
Additional Information: “Myrtle’s Warbler” and “Audubon’s Warbler” were once considered separate species, but were found to interbreed; the species is now called Yellow Rumped Warbler