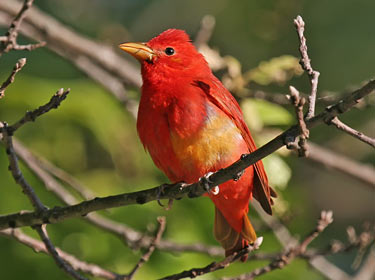 Field Notes: The adult males remain red all year round. Usually forage in the canopy of trees.

Fun Facts: The Summer Tanager is considered a bee and wasp specialist, often catching them in midflight and removing the stinger by rubbing it against a tree. Then after catching the adults it perches near the hive and tears it open to reveal the bee or wasp larvae.