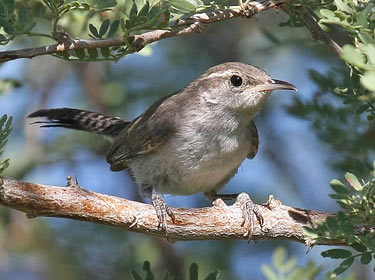 Song is a variable high, thin buzz and warble. Calls include a flat, hollow “chip.”

Habitat: Found in open woodlands, brushy habitats, farmsteads, and towns. In the eastern part of their range they overlap with the House Wren in their habitats.

Where in Nebraska: Uncommon or rare spring and fall migrant and summer resident in southwestern Nebraska.

Status: Populations are sharply declining east of the Rockies, especially in areas east of the Mississippi.

Fun Facts: Bewick’s Wren males learn their song while they still live within its parents territory but learns to mimick the neighboring males song. That song becomes their song for their whole life.